Channellock, Inc., located in Meadville Pennsylvania, is a family-owned and operated business by the fifth generation of the DeArment family. Since 1886, the company has manufactured high-quality pliers with the famous blue grips. With over 350 employees, Channellock now produces more than 75 different sizes of pliers. The company operates out of two facilities totaling 260,000 square feet, including a recent 35,000 square foot expansion at their second facility.

Over the course of the pandemic, Channellock’s workforce was down 20%, but their order demand continuously increased due to their competitors’ supply chain disruptions. Leadership recognized the
opportunity to grow the business by taking a larger market share but needed to increase operational effectiveness to meet the increased demand. NWIRC introduced the company to an expert resource for operational excellence, Future State Engineering (FSE), who worked with a Channellock team on a design sprint project to look holistically across the organization, outline a desired future state, and identify areas to focus on for improvements. The design sprint included a team of 25+ participants comprised of executives, managers, and supervisors from a cross section of departments. Prior to the design sprint, team members had different opinions as to critical areas, such as inventory management, equipment downtime, process efficiencies, as well as, information and product flow. The design sprint began with getting agreement on and prioritizing their critical issues and, more importantly, their root causes of the critical issues. This allowed the team to define what to change, what to change to, and how to cause that change. During the project, the team identified several areas as opportunities for improvement – with most of their concerns revolving around being able to meet increased customer demands while maintaining acceptable lead-times and product availability (inventory). As with most companies, Channellock had limited resources, and it was a challenge staying focused on the continuous improvement efforts required to exceed their growth goals. Ultimately, leadership recognized that to get the greatest impact they needed to look at the organization from a different perspective. 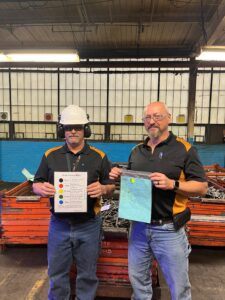 To achieve desired change, the leaders of the organization needed a different approach to managing operations than the status quo. The design sprint process helped document their current reality and discover new opportunities to manage operations by visualizing and designing a desired future state design. At the completion of the design sprint, the decision was made to move to implementation where both Channellock and FSE agreed that operational excellence stems from changing mindsets which is supported by working in cross-functional teams and constant focus. This required someone from the FSE team to be onsite at Channellock nearly every day for support, coaching, mentoring, and reinforcement to challenge employees to look at operations differently. Each set of actions, defined by the goal tree and directed by the Steering Committee, involved some initial training, establishing cross-functional teams, and implementing based on the team’s newly acquired knowledge. In addition, key performance indicators (KPIs) were identified, measured, and monitored on a weekly basis.

As part of the goal tree implementation, there were several major changes in the way operations were managed. Technology, including a dynamic buffer management software, as well as visual productivity indicators were part of the Implementation phase that allowed Channellock to move from a push production system to a pull system in which reliable production lead times and replenishment cycles were established. With a new system in place, the culture was addressed to change the mindset from producing as much as possible to only producing what the customer ordered while adhering to synchronous flow principles. Cross-functional teams were established to focus on improving the production system reliability. This included using concepts such as failure modes and effects analysis (FMEA), single minute exchange of dies (SMED), workplace organization (5S) and visual management as well as full-kit concepts.

Due to their new operational excellence mindset, employees are now taking a more proactive approach to making changes that are improving operations, and the bottom line. The outcome of the design sprint was to get consensus and alignment on the critical issues as well as how to address them. The project led to identifying areas where the company could improve processes and increase company performance. Here are some of the results reported one year after beginning the Implementation phase: 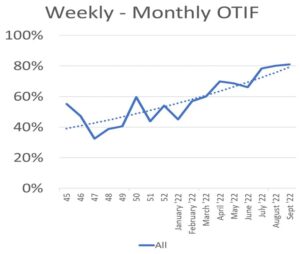 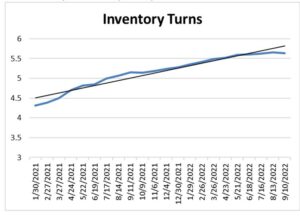 The operational excellence implementation allowed Channellock to focus on process improvements in the areas necessary to improve flow and significantly increase capacity to better serve the customer. Over the course of the yearlong project, Channellock significantly decreased work in process inventory, drastically reduced production lead times, improved equipment reliability, and reduced variability in key constraint areas. Additionally, Channellock reports a huge change in the culture including:

• working together, instead of in silos,
• managing constraints and bottlenecks,
• material management,
• using an advanced, color coded production scheduling tool every day, and
• an employee incentive profit sharing payout that has the potential to be $7 per hour worked versus prior periods of $3-4 per hour worked.

Overall, operational excellence a great success for Channellock on so many levels and all resulting in a more positive cashflow. 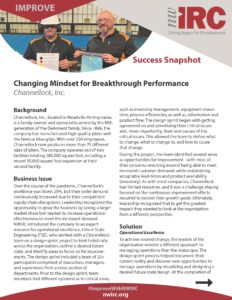