Onex, Inc. began in 1965 as a supplier to the many foundries in the Erie, PA area, stocking refractory products for several major refractory manufacturers. In the 1980s, Onex branched out into all the major heat-treating industries. As the number of foundries in Erie began to decline, Onex diversified into a broader offering of products and services such as: design and installation of refractory linings, combustion services, and shop fabrication. Onex became a “one stop shopping” source and a solutions provider for its growing and extensive customer base.

According to Onex President, Ashleigh Walters, the company was first introduced to lean manufacturing when they started working with NWIRC and lean expert, Craig Corsi, on a value stream mapping project. Corsi facilitated a five-day on-site project that ultimately led to their decision to move to another facility better suited for their needs. One of the red flags during the project was the amount of wasted motion (steps) for doing work. Finding a new facility and moving was quite an undertaking, but once settled in their new space, Walters’ knew there were opportunities for greater efficiencies.

Lean Together™ is an ongoing collaborative learning program focused on developing true and lasting cultural changes, where everyone’s job is making small incremental improvements- everyday. The program, created by NWIRC, includes nine monthly sessions of classroom education, facility tours, 2 Second Lean book discussions, and assignments. Walters knew the successes of companies who were previously part of Lean Together™, so was onboard to get Onex started with Lean Together 1.0.

Employees Mike Bliel, Production Supervisor and Leanne Crail, Laborer and Welder were the champions, attending the monthly sessions and responsible for homework assignments. “I attended the kick-off session, but Mike and Leanne looked at me to answer questions during the discussion. I knew then it was important for them to go alone and bring the information back for the rest of our team,” Walters said, noting that she and other Onex employees helped with homework assignments.

One of the early sessions of the Lean Together™ program focuses on the importance of weekly meetings, reviewing type of content to cover and tips for running effective ‘stand-up’ meetings. Companies are then given an assignment to begin weekly meetings if the company isn’t already doing them. Onex determined that their standard agenda for each meeting would include: 1) What bugs you?, 2) a safety tip, 3) quality issues (mistakes), 4) company education, 5) upcoming work, 6) compliments, and 7) assignments for the next week. All employees rotate presenting various agenda items that are planned in advance and displayed on a calendar. During the meeting, the ‘What bugs you?’ items are added to a poster noting the individual who will be responsible to focus on the improvement.

For Mike Bliel, cleanliness and organization is a big thing, and historically, hard to maintain for more than a couple days. But by working together, their team came up with solutions to make it easier to sustain organization, like putting up shadow boards and creating special holders for tools so everything has a place. They organized standard gang boxes for the employees who work at a customer’s jobsite. These giant tool boxes now consist of all the same tools with a visible checklist of everything contained inside. This type of visual lessens the risk of something being left behind, which ultimately reduces the cost of having to either return to a jobsite for the tool or having to replace a lost tool altogether. In addition, a white board is attached for making notes of tools that are broken and need to be fixed or replaced.

At first, Bliel didn’t think attending Lean Together was going to be a fit for Onex, but he’s changed his mind. “At my first meeting for Lean Together, I was thinking ‘what did I get into, this won’t work for us’. But, after learning more about 2 Second Lean, it’s awesome! It’s a way of thinking to improve and work together as a team. These ideas can work for anyone. Just like any change, there are struggles in the beginning to get everyone onboard but for us it happened quickly,” he said. Onex initially started their weekly meetings with discussion about 2 Second Lean, in order to build some momentum. Each week, someone was assigned a chapter and then summarized the information during the meeting. The office staff soon saw the benefits and wanted to get involved, so they started listening to the audio book version and came up with their own improvements. All the departments are now working together and at the end of the day, all areas are clean and in order.

Walters said, “everyone now has a better understanding of how their job impacts their co-workers, the company as a whole, and our customers. “The key to success is for owners or executives of companies to give employees the support and time needed for the program. It will then create a domino effect throughout the organization.” Lean Together facilitator, Craig Corsi, said, “Onex has embraced the true essence of the program by growing their people through company and industry education, creating individual employee development plans, and by paying it forward for other companies to learn about their journey.” As far as overall impact of Lean Together™, Onex has seen an increase in gross margins that they attribute partially to their improved efficiencies. They are also optimistic about future sales. “The shop shows really well when we have visitors and I think that makes a big difference in a client’s view of Onex as a supplier,” said Walters. There is no doubt that continuous improvement is now ingrained in Onex’s culture. 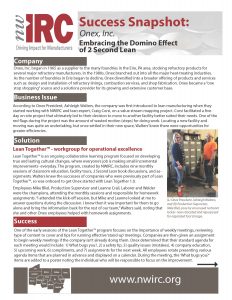