It’s always fun visiting manufacturing companies throughout the region, especially those who NWIRC has helped with an improvement or training project. Over the past several years, we’ve worked with numerous companies in our Lean Together™ program who, through tours and classroom sessions, have been inspired to develop a culture at their companies for making incremental improvements every day. The common thread among them is that employees are very much a part of the equation. What follows are some great examples.

Patti Schwarz, IT and Continuous Improvement Manager at The Electric Materials Company (EM) in North East, PA, started 2 second improvements in her own department. When she started oversight of the IT department, she noted that the working space was quite a mess and equipment couldn’t easily be found. Now they post a board for signing out equipment that helps keep track of where things are in the plant and they created a foam board for IT equipment so you can easily spot what is available and what is missing. This improvement helped save time by not having to search for equipment when needed and also saved money by not having to replace lost items. When touring EM, you can see several other areas of the plant where employees have made 2 second improvements. Many of these improvements were focused on better workspace organization, such as area of organized tools, bits, and parts. Their team purged, sorted, and labeled their dies in one contained area. But not all of their improvements are about organization, some are process-related, as she cited an improvement that made a significant impact in their plating department production time and labor.

Solar Atmospheres in Sharon PA has participated in the advancing levels of Lean Together™ over the years. They hosted a Lean Together Advanced meeting where companies have a more indepth focus on developing a company culture of continuous improvement. During that session, facilitator Craig Corsi, reviewed concepts for engaging employees during a Gemba walk, and initiated a value stream mapping to find opportunities for improvements. After the ‘walk’, the group brainstormed ideas about the specific process they saw at Solar. The exercise corroborated process changes that Solar has started, brought to light some new ideas, and demonstrated the value of engaging employees in a cross-functional team – including those involved and not involved in the process. Quality Coordinator, Mike Kreatsoulas says their employees come up with new ideas for improvements all the time and feel really good about contributing to the success of the business. Solar has made numerous small improvements over the past several years that focus on safety, ergonomics, and work processes.

EM and Solar Atmospheres are just a couple examples of how continuous improvement can be sustained- clearly, with help from your employees. 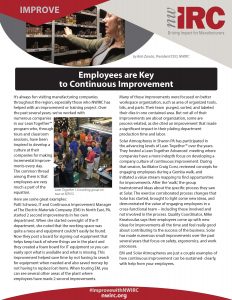