Along with the rest of the national economy, the U.S. manufacturing sector appears poised to experience a substantial rebound in 2021. The median forecast by members of the Federal Reserve is for U.S. real gross domestic product (GDP), an overall measure of the nation’s total output of goods and services, to grow by 6.5% this year, after contracting by 3.5% in 2020. Moreover, in its April report on “Industrial Production and Capacity Utilization,” the Fed noted that U.S. manufacturing output increased by 2.7% in March, after decreasing by 3.7% in February. The March index for durable manufacturing increased by 3.0% while that for nondurable manufacturing rose by 2.6%. And according to the Fed, manufacturing capacity utilization increased by 1.9 percentage points in March to 73.8%.

These encouraging statistics are consistent with the optimistic outlook of many U.S. manufacturers. In its “Manufacturers’ Outlook Survey” for the first quarter of 2021, the National Association of Manufacturers (NAM) reports that 87.6% of respondents were positive about their own company’s outlook, the highest level since the first quarter of 2019. Furthermore, two-thirds of the survey respondents anticipated that their revenues will be back to pre-pandemic levels by the end of 2021. As a result, NAM observes that, “Manufacturing production is likely to exceed pre-pandemic levels in the next couple months, and employment in the sector has risen in all but one month since April 2020.” 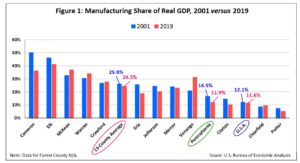 How has the COVID-19 pandemic affected the manufacturing sector in this region? Across the 13 counties, on average, almost 43% of the jobs lost between January and April of last year had been recovered by September1. Although this is below the pace of manufacturing job recovery in Pennsylvania (57.5%) and the U.S. as a whole (55.5%), four counties actually registered higher rates of job recovery (Clarion, McKean, Cameron, and Elk). For example, by September 2020, Clarion County had recovered over 94% of the manufacturing jobs lost between January and April.

The U.S. manufacturing sector has experienced significant changes as well as challenges during the past several decades. Nevertheless, in terms of its contribution to both total output (real GDP) and employment, it continues to play a significant role. Looking forward, the sector will receive a significant boost if Congress passes some of the major legislation proposed by the Biden administration. For example, in addition to the $2 trillion infrastructure plan which has perhaps received the most attention, another important component of the President’s overall American Jobs Plan is to “revitalize manufacturing, secure U.S. supply chains, invest in R&D, and train Americans for the jobs of the future.” Good news for manufacturing in the country, state and region.

See this article and more in the latest issue of Back to Business, a resource for the COVID-19 Recovery Program.